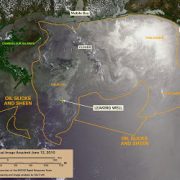 This MODIS/Aqua satellite image, taken on June 12, has a broad sunglint pattern centered on the eastern Gulf that effectively illuminates the main oil slick as well as areas of what we interpret as much thinner sheen. The bright band of sunglint spanning this image reveals fine structure (squiggly bright lines) in areas to the east of what we interpret as the main area of oil slick; this structure can be caused by natural surfactants, or it may indicate very thin layers of residual sheen related to the ongoing spill. As on June 9, there is some ambiguity in our delineation of the area of slicks and sheen (orange line), which extends across an area of 23,140 square miles (59,932 km2) — as big as our home state of West Virginia: 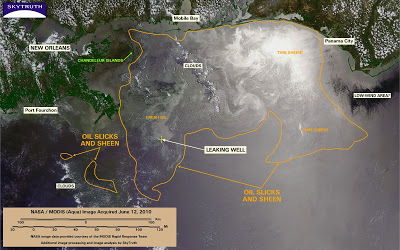 Oil appears to be making landfall across 40 miles of coast east of Mobile Bay, from Gulf Shores, Alabama to Perdido Key, Florida. Tendrils of oil, possibly thin sheen, reach toward the Florida coast from Pensacola almost as far east as Panama City. Some news accounts support this analysis.

And the government just revised the estimated leak rate from the well – they now say it’s leaking anywhere between 1.5-2.5 million gallons per day, with the containment device currently capturing about 500-600 thousand gallons of that flow. That means that since BP cut the riser and installed the latest containment cap, at least 900 thousand gallons – and possibly as much as 2 million gallons – have entered the Gulf daily. At the high end that’s nearly twice as much as the 1.1 million gallon estimate SkyTruth and Dr. Ian MacDonald of Florida State University made back on May 1.

Leaking Well at Platform 23051 Location – New Images
Scroll to top
SkyTruth and/or its third party tools use cookies to monitor traffic in the aggregate on our websites and applications and to improve user experience. If you continue browsing, we'll assume you agree to the use of cookies. You can change your cookie settings at any time in your browser settings. Find out more in our privacy policy.