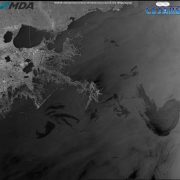 Our friends at CSTARS just posted this stunning image. Taken by the Canadian-operated radar satellite, RADARSAT-2, it clearly shows oil slicks and sheen spread across a wide area (about 5,025 square miles, or 13,000 km2) in the Gulf of Mexico early this morning (May 8): 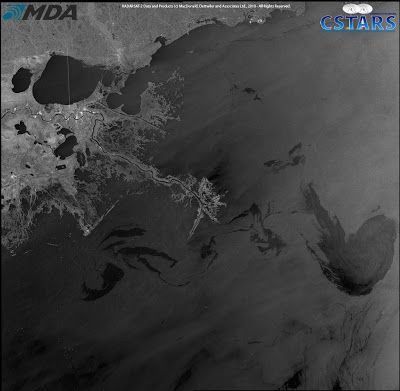 We’ve added some analysis to help you armchair interpreters. Oil slicks look dark on radar images because the oil reduces the surface tension of the water, dampening (smoothing out) the small wavelets that normally roughen up the surface of the ocean. But any smooth water will look dark on radar, so not all dark patches are caused by oil: 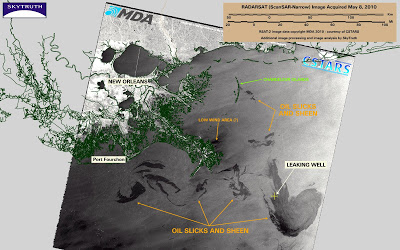 UPDATE 5/8/10 7:00 pm – The first attempt to place a 70-ton containment box over the main leak failed today; the box has been moved aside and is being troubleshooted, and tar balls have begun to wash up in Alabama. The leak is continuing unabated, at a rate we calculate to be about 1.1 million gallons (26,500 barrels) per day – five times higher than the last official estimate (5,000 barrels per day) the Coast Guard made, before they quit making estimates a few days ago, admitting they had no accurate way to estimate the spill rate.

We estimate more than 18 million gallons of oil have spilled so far.

Now we can do a heads-up comparison of the RADARSAT-2 image with this MODIS/Terra image taken about four hours later. Still some clouds obscuring portions of the slick; observable slick and sheen spans about 4,100 square miles (10,624 km2). Fresh oil is apparent around the location of the leaking well; it seems to be carried to the southeast, then gets caught up in a counterclockwise gyre in the currents: 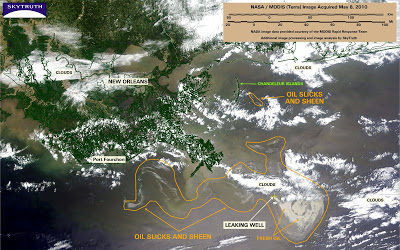 BP / Gulf Oil Spill – How Big Is It?
Scroll to top