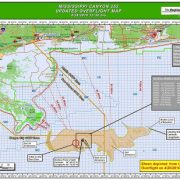 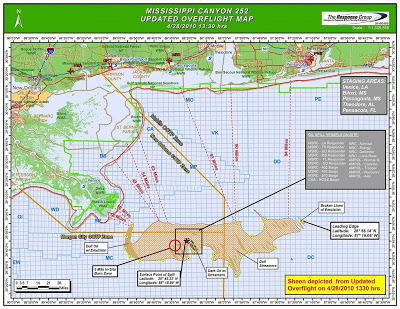 Dr. Ian MacDonald at FSU just produced a new spill-size estimate based on the US Coast Guard aerial overflight map of the oil slick on April 28, 2010. This map shows the slick covering 1,786 square miles (4,627 square kilometers). The bottom line: on April 28 there was a total of 8.9 million gallons floating on the surface of the Gulf.

That suggests a minimum average flow rate of slightly more than 1.1 million gallons of oil (26,500 barrels) per day from the leaking well on the seafloor. Since we’re now in Day 11 of the spill, which began with a blowout and explosion on April 20, we estimate that by the end of the today 12.2 million gallons of oil, at a minimum, have been spilled into the Gulf of Mexico.

The oft-quoted official estimate for the Exxon Valdez spill is 11 million gallons, although some think that is the lower limit of the likely range. It appears that we’ve just set a very sad new record.

These estimates of the total volume of oil released by the Deepwater Horizon spill were derived from the USCG fly-over map (Figure 1). The map was geo-referenced in Arc Map and the areas of each of the slick types (dull oil streamers, etc) were measured with a planimeter tool. Thickness estimates for each slick classification were taken from the BONN guidelines as published in the NOAA field manual (Figure 2). Conservative values were used for each slick types. Note that the predicted average layer thickness are still very small. 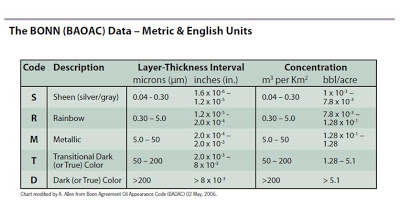 A human hair is approximately 100 µm (microns). The main slick, which corresponds to the cross-hatched area was assigned a low value of 0.5 µm. We calculate a total volume of oil for this slick as 8.94 million gallons (212,000 barrels) (Figure 3). Considering that the oil in the water on April 28 has been deposited since the blowout and explosion on April 20, the flow rate should be on the order of 26,500 barrels per day. Some fraction of the total oil released will have been evaporated or emulsified and sunk in the time since the spill began, or collected by the response crews, so this should be considered a minimum estimate.

Figure 3. Volume of oil based on Coast Guard map (Figure 1) and thickness (Figure 2).

UPDATE 5/1/10 5:15 pm – Lots of cloud and haze but this afternoon’s MODIS satellite image shows the main body of the oil slick around the leaking well location.