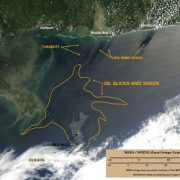 We’re getting requests from folks wanting to see the latest satellite images of the oil slick in the Gulf of Mexico. It’s been cloudy the last couple of days, so the NASA /MODIS imagery hasn’t been very good; the latest we posted was from the afternoon of May 2. But observers tell me it’s clear and sunny in the Gulf today, so we’re hoping the MODIS images this afternoon will give us a clear look at the entire slick. We’ll process and post those images as quickly as we can. Follow us on Twitter – we tweet as soon as we upload anything new – and keep checking here and in the SkyTruth image gallery.

There is a gallery of radar satellite images here – radar cuts through the clouds and haze to show the ocean surface, and the slicks are clearly visible on the May 3 image. The drawback – this image only covers part of the slick. We hope to see some better coverage in coming days.

We’d like to see a systematic, Gulf-wide monitoring program established, so that when emergencies like this happen the stream of images from multiple satellite systems is immediately available to all who want to see it – including folks like the Bay St. Louis-area local emergency response guy who just called SkyTruth for assistance. 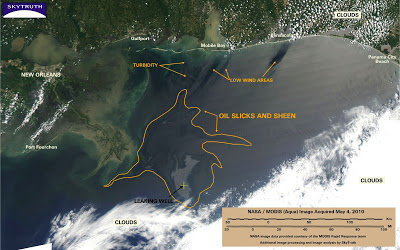 MODIS satellite image from the afternoon of May 4, 2010.

UPDATE 5/4/10 6:30 pm – And here it is. Today’s MODIS / Aqua image features a break in the clouds (just barely) to reveal much of the oil slick. Fresh upwelling oil is apparent around the location of the leaking well. Long tendrils of slick and sheen stretch to the east and southwest; the total area of slicks and sheen, possibly including patches of open water, is 3,260 square miles. Nearshore, things get complicated: there are pale bands of turbidity, probably caused by the recent stretch of high wind and waves; and a few dark streaks and elongated patches trending northeast that we interpret as low-wind zones (wind shadow, the result of light winds from the northeast this afternoon). But there could be patches of oil slick obscured by these features. To the south, heavy cloud may also be hiding some of the slick from this ongoing spill.