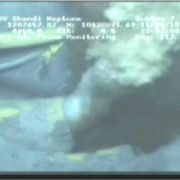 By now everyone has seen this video, released on May 12 by BP, that is reportedly showing the main leak from the damaged well as a result of the fatal Deepwater Horizon blowout, explosion, fire and ongoing spill: 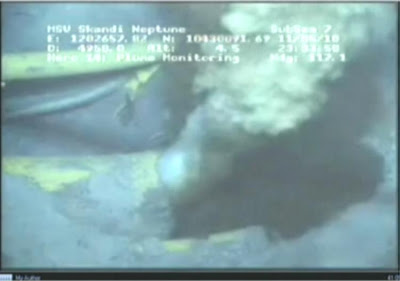 The main leak is located along the riser pipe about 460′ from the blowout preventer; the pipe is laying on the seafloor. The second, smaller leak is just above the blowout preventer, and apparently accounts for about 15-20% of the total flow from the well. According to statements made by BP to the press on May 3:

The riser is kinked at a 90-degree angle about 5 feet above the blowout preventer, and oil is bleeding from an irregular crack, BP spokesman Bill Salvin said.

A second leak is 460 feet away on a section of the riser that lies on the gulf floor.

A third leak, about 800′ down the riser pipe, was sucessfully capped on May 5 but that operation did not change the rate of flow, which was simply diverted to the other two leak points.

Where is all that oil? We don’t think we’re seeing that much at the surface in our satellite images. But scientists just announced they’ve discovered large underwater plumes of oil. Not all of the oil leaking from the well may be making it to the surface; dispersants, applied directly into the stream of leaking oil, and sprayed on the oil slick at the surface, are driving some of the oil underwater; and natural mechanical action of wind and waves can also cause oil to eventually sink. That may spare the beaches to some extent, but it raises questions about where all that oil is going, where will it ultimately end up, and what are the potential environmental and economic consequences.