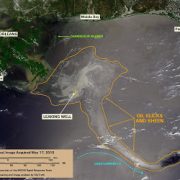 Today’s MODIS / Terra satellite image is the most cloud-free we’ve seen in many days, and what it reveals is disturbing: part of the still-massive Gulf oil slick has apparently been entrained in the strong Loop Current, and is rapidly being transported to the southeast toward Florida. The total area covered by slick and sheen, at 10,170 square miles (26,341 km2), is nearly double what it appeared to be on the May 14 radar satellite image, and is bigger than the state of Maryland: 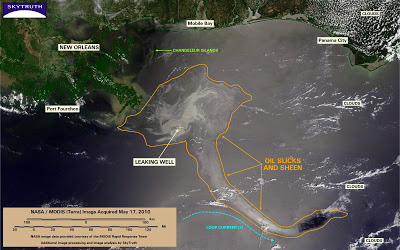 Per The Weather Channel’s tropical expert Dr. Richard Knabb, “based on satellite images, model simulations, and on-site research vessel reports, I think it is reasonable to conclude that the oil slick at the surface is very near or partially in the loop current. The loop current is responsible in the first place for extending that stream of oil off to the southeast in satellite imagery.”

BP / Gulf Oil Spill – How Big Is It?
Scroll to top