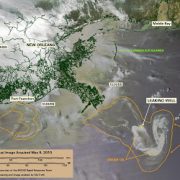 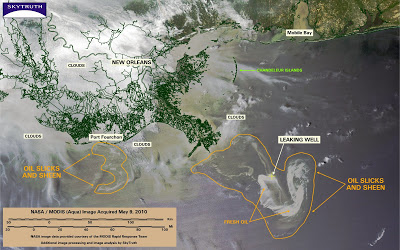 Today’s MODIS satellite image from NASA shows plenty of oil slick in the Gulf of Mexico from the ongoing BP / Deepwater Horizon spill – slicks and sheen cover about 4,384 square miles (11,355 km 2) although clouds, haze and turbidity (again…) are possibly obscuring portions of the slick. Fresh-looking oil is still moving southeast away from the site of the leaking well, and appears to be caught in a counterclockwise gyre (a circular current at the ocean’s surface – not uncommon in the northern Gulf). This may be helping to keep most of the oil trapped close the the leaking well, although the slick also extends northwest to the fringes of the Mississippi Delta, and large patch of slicks is visible far to the west, in the vicinity of Port Fourchon.

We estimate this well is leaking at a rate of 1.1 million gallons (26,500 barrels) per day. At this rate, the spill has now exceeded 21 million gallons. Most news accounts of this spill are repeating a much lower estimate of 210,000 gallons (5,000 barrels) per day, an unexplained number that NOAA and the Coast Guard were using for a few days until they admitted a week ago that they couldn’t accurately estimate the flow rate. We think it’s better not to use any number at all than to lock in on an unrealistically low estimate that nobody currently supports. Read why we think that here.