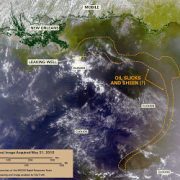 The MODIS / Terra image taken today shows a very faint, long belt of anomalous ocean color that appears to follow the Loop Current. We have very tentatively identified this as possible oil slick and sheen carried far to the south. Consider this a low-confidence analysis; it’s possible that the Loop Current has a distinct ocean-color signature without any oil present: 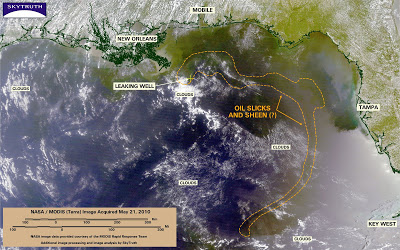 BP / Gulf Oil Spill – Satellite Images Show Spreading Slick
Scroll to top
SkyTruth and/or its third party tools use cookies to monitor traffic in the aggregate on our websites and applications and to improve user experience. If you continue browsing, we'll assume you agree to the use of cookies. You can change your cookie settings at any time in your browser settings. Find out more in our privacy policy.