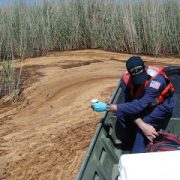 We just learned about an oil spill yesterday in the Delta National Wildlife Refuge near Venice, Louisiana. The US Coast Guard is responding to the estimated 18,000-gallon spill of crude oil from a pipeline jointly operated by Chevron and BP. The cause of the spill is under investigation, but early reports suggest that workers on an Exxon barge may have accidentally damaged the pipeline.

This is yet another reminder of the risks that offshore drilling poses to onshore and coastal habitats and communities: the pipeline carries oil from an offshore platform out in the Gulf of Mexico. 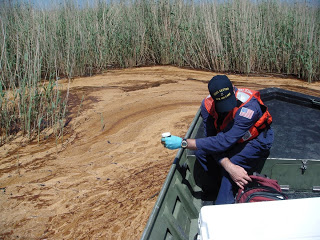 The Coast Guard has posted high-resolution photos showing the impacts of this spill, which ranks as a “medium” spill by Coast Guard definition (an inland spill of 1,000 to 10,000 gallons); the kind of spill we usually don’t hear about, unless it happens in an interesting location like an urban area, a popular beach, or a place that we all assume is protected, like a wildlife refuge. Looking at these pics it’s difficult to imagine the impact of a multi-million-gallon spill like the Montara/West Atlas blowout and spill off Australia’s coast last year.

Atlantic Drilling – New Jersey Oil Spillustration
Scroll to top
SkyTruth and/or its third party tools use cookies to monitor traffic in the aggregate on our websites and applications and to improve user experience. If you continue browsing, we'll assume you agree to the use of cookies. You can change your cookie settings at any time in your browser settings. Find out more in our privacy policy.