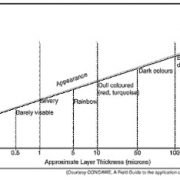 Based on SkyTruth’s latest satellite observations today of the size of the oil slick and published data on the thickness of floating oil at sea that produces a visible sheen (1 micron, or 0.000001 meters) we think the official estimate of the spill rate from the damaged well has been significantly too low.

Immediately after the Deepwater Horizon rig sank on April 22, the Coast Guard estimated that the well was leaking 336,000 gallons (8,000 barrels) of oil per day. But for the past few days they’ve estimated the rate at 42,000 gallons (1,000 barrels) per day. We think it’s actually a lot closer to their original estimate.

We have a visible oil slick covering 2,233 square miles (5,783 km2). Given a minimum thickness of 1 micron (see chart below), that is 5,783 cubic meters of oil, or 1,527,706 gallons (36,374 barrels). The blowout happened almost 7 days ago on April 20. That’s at least 5,000 barrels of oil per day – assuming none of it was consumed during the two-day fire that raged before the rig sank on April 22, and none has been collected by the response crews that have been working diligently for days.

Our calculation also assumes the entire slick is a sheen barely thick enough to be visible. Yet the images we’ve seen so far, especially the ALI image taken on April 21, suggest a strong spectral response from the oil slick, and that in turn suggests a much thicker slick. Today a BP exec claimed that 3% of the slick was 100 microns thick, and the remaining 97% is only one or two molecules thick. We’re skeptical: 1 micron is the published, generally accepted lower limit for a visible sheen at sea: 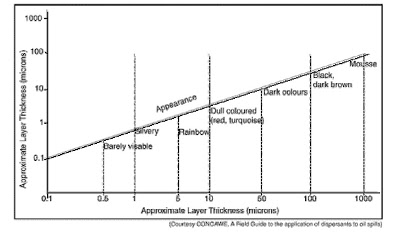 CONCAWE chart of thickness and visible appearance of floating oil at sea. From a Minerals Management Service report, Real-time Detection of Oil Slick Thickness Patterns with a Portable
Multispectral Sensor.

This is what Dr. Ian MacDonald has to say. Ian is one of the world’s foremost experts in remote sensing of oil slicks, and has spent his career exploring the Gulf of Mexico:

It turns out to be pretty easy to roughly estimate the amount of oil in a floating oil spill — though like all estimates, large doses of caution should be applied. The critical variable is the thickness of the floating oil layer.

The CONCAWE guidelines from back in the late 80s are a reasonable place to start. CONCAWE gives a chart of thickness and appearance as shown in the figure. Notice that the minimum visible thickness is about 1um. If we take 1 um as a bare minimum starting place, think that a square meter of oil spill with a 1 um layer means that there is a 1000000/th of a cubic meter of oil floating in that spot. If you have 1 sq km of oil floating on the sea *and* it has a uniform thickness of 1 um, well, you have a million of those layers or 1 cubic meter. That makes 1000 liters of oil or about 264 gallons (6.2 bbl) per sq km of spill. We are seeing conservative estimates of 1000 sq km already on April 25th–I believe you measured 800 sq miles which is closer to 2000 sq km.

So for the minimum value on 25 April we have a minimum of 6,200 bbl of oil already on the water, which means that the 1000 bbl/day estimate we’ve been seeing is too low for an event that began on 21 April. However, this is probably a much too conservative estimate. This size in sq km of the floating oil spill may be greater by a factor of 2, as your estimate suggests. More important, the average thickness may be a factor of 10 or more greater. Certainly your more recent images suggest that the spill is locally dark and thick. Check the CONCAWE chart and you see that some of those sq km of ocean may represent 200 or 300 bbl of oil each.

So it would not be unreasonable to multiply that 6,200 bbl number by 20. This gets you up to 126,000 bbl in the water, which is about 5,300,000 gallons. That’s roughly half the total Exxon Valdez spill. I do not think I am being too alarmist here–but you should check my numbers.

It will be critical to get some more recent images to see how much the slick has grown in the past couple of days.