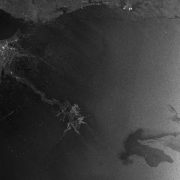 Just five months ago, SkyTruth’s President testified to Congress about the risks posed by offshore drilling. Now we’re seeing a catastrophic spill in the Gulf that could soon surpass the sorry benchmark set 20 years ago by the 11-million-gallon Exxon Valdez spill.

SkyTruth is beginning to get radar satellite images showing the oil slick from the Deepwater horizon blowout and spill in the Gulf of Mexico. These images, from a variety of non-US satellites (don’t get us started on that), cut right through clouds and haze to show the “texture” of the ocean surface. Oil flattens the ocean out (that’s why they call it a “slick”); flat water looks black on radar images. This image, acquired by the European Space Agency’s Envisat satellite, clearly shows the sprawling slick at about noon local time on April 26: 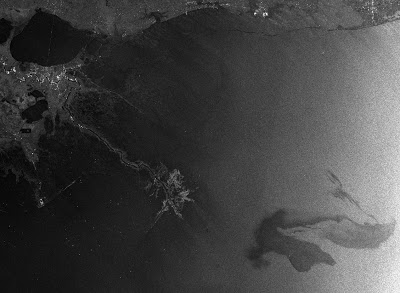 This, and other radar images that SkyTruth is getting, confirm what we’ve seen on the NASA/MODIS images so far, and support our conservative calculations showing that in the first week of this spill at least 6 million gallons have entered the Gulf. That’s a spill rate of at least 850,000 gallons (20,000 barrels) per day, 20 times larger than the official Goast Guard estimate of 42,000 gallons per day.

The Australia blowout and spill took 10 weeks to control.

The Exxon Valdez tanker spill totaled 11 million gallons. We could exceed that in just a few days, if we haven’t already.

UPDATE 4/28/10 9:30 pm – A NASA/MODIS satellite image taken this afternoon has clouds, jet contrails and haze that obscure much of the oil slick, but shows the western edge of the slick is within 10 miles of shore.

Gulf Oil Spill Rate Must Be Much Higher Than Stated – 6 Million Gallons...

Gulf Spill – Oil Is Hitting The Shore
Scroll to top