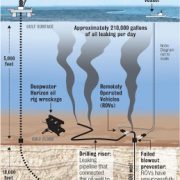 The Mobile, Alabama Press-Register has published an article by Ben Raines with an alarming prediction. If the leaking well in the Gulf of Mexico shrugs off all control – the crippled blowout preventer, the wellhead, and any remaining control valves or baffles impeding the flow of oil and gas through the well – the rate of spillage could go to a whole other level: as much as 2 million gallons (150,000 barrels) per day. 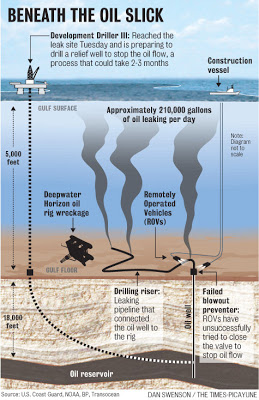 Schematic diagram of the leaking well and the relief-well drilling plan. Courtesy Times/Picayune.

This worst-case scenario is based on the fact that there are individual wells in the Gulf of Mexico that produce 1.26 million gallons (30,000 barrels) of oil per day. That’s a controlled rate of flow. If all control were removed, the flow rate would be higher. How much higher?

“Typically, a very good well in the Gulf can produce 30,000 barrels a day, but that’s under control. I have no idea what an uncontrolled release could be,” said Stephen Sears, chairman of the petroleum engineering department at Louisiana State University.