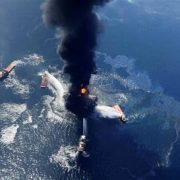 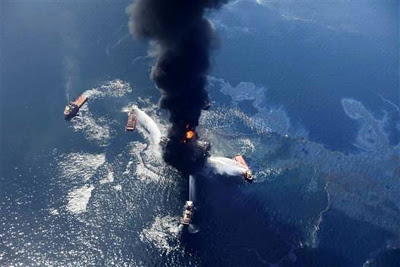 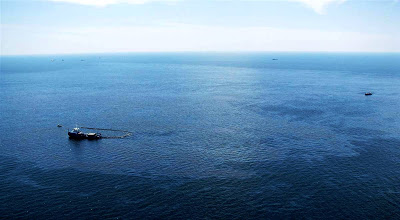 Oil slicks and sheen over the site of the now-sunken rig on April 22. Containment booms and skimmer vessels are being deployed to corral the oil. Coast Guard photo courtesy MSNBC. 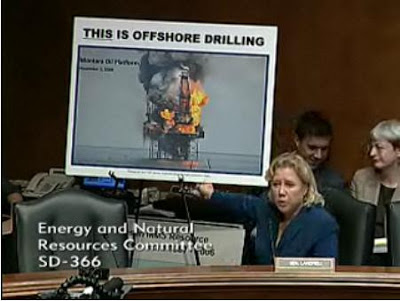 11 rig workers are still missing from the Deepwater Horizon explosion and fire off Louisiana. We are dismayed but still hoping for the best.

Just 5 months ago, as SkyTruth’s President I was invited to give testimony on the risks posed by offshore drilling at a Senate hearing. My well-documented testimony included details on the blowout at a new rig and platform off Australia last year that resulted in a 10-week-long oil spill, ultimately covering 22,000 square miles of ocean with millions of gallons of oil. At the same hearing the Deputy Director of the Minerals Management Service, the President of Shell Oil Company, and the Vice President of Gulf operations for BP (David Rainey) touted their environmental records and the technical achievements that supposedly have rendered major offshore accidents a thing of the past.

One of the Senators in attendance at that pro-drilling hearing suggested I was misleading the American public and being intentionally untruthful. Now that same Senator is calling for a thorough investigation of the blowout and spill in the Gulf from the doomed Deepwater Horizon drill rig.

You can read the testimony here.

You can watch streaming video of the entire hearing. My testimony begins at 47 minutes. Senator Landrieu’s comments and questions begin at 86:30 and 115:00.

Gulf of Mexico Oil Spill Getting Worse
Scroll to top