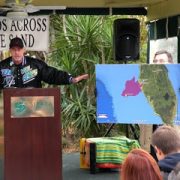 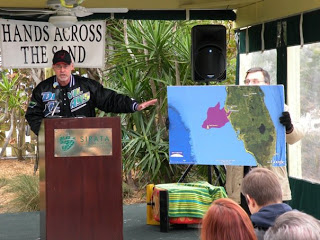 Folks concerned about offshore drilling in Florida held an event on February 13 called Hands Across the Sand. Sierra Club of Florida reports about 10,000 people participated. SkyTruth’s work related to last year’s oil spill in the Timor Sea off Australia made an appearance, in the form of a poster-sized map superimposing the Australia oil slicks on the Gulf Coast of Florida for scale. This was presented at a news conference hosted by a major coastal resort.

Our work is intended to communicate just how much ocean was affected by the 10-week-long Montara oil spill, and what a similar spill could impact if it were to happen in US waters. See the latest maps in our gallery.

Pebble Mine (Alaska) – Superimposed on Seattle

Pebble Mine (Alaska) – How Big? Really Big.
Scroll to top