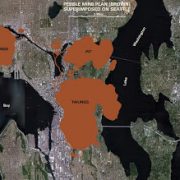 It’s been a while since we’ve written about the proposed Pebble open-pit copper/gold mine in southwest Alaska. In January 2007 one of the world’s biggest mining companies, Rio Tinto, increased it’s ownership stake in Northern Dynasty Minerals to almost 20%, a clear sign that they are banking on ultimate approval of the Pebble mine by the state government. Northern Dynasty is a small Canadian mining company with no experience actually building and operating large mines. Rio Tinto, on the other hand, owns and operates some of the biggest mines on the planet: they’re co-owner of the massive Grasberg open-pit copper mine that’s smothering lowland rainforest in Irian Jaya, Indonesia, as seen on these SkyTruth satellite images. And in July 2007, international mining giant Anglo American acquired a 50% stake in the Pebble project. Philip Mattera produced a critical report looking at the global operations of Anglo and their subsidiaries.

Pebble mine proponents received encouragement in 2008 when Alaska citizens voted against a ballot initiative that would have prohibited new mines in the state from discharging pollutants that could harm humans or salmon. Mine opponents — commercial fishermen (including Sig Hansen, captain of the Northwestern for all my fellow Deadliest Catch freaks), sportsmen and environmental groups — remain concerned about the potential impact of large-scale mining operations in the headwaters of Bristol Bay, a wild-salmon fishery that’s worth $400 million per year to the state. Some suggest that even the perception that wild-caught salmon in this area might be tainted by mine pollutants could scare off consumers and hurt the fishing industry. 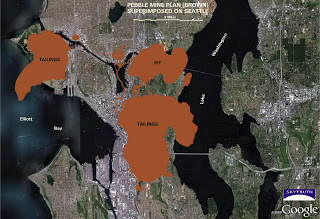 Proposed pebble open-pit mine superimposed on the city of Seattle for scale.

We’ve superimposed the Pebble mine plan on Seattle to give you a feel for just how big this mine would be. It features an open pit that would cover 1400 acres, and two huge tailings impoundments of 2500 acres and 5000 acres that are bounded by a series of 5 earth-and-rock-filled dams. The larger of the impoundments will feature a 700′ tall dam almost four miles long – the largest dam in the world, ultimately holding back a 2.5 billion-cubic-yard slurry of tailings nearly 700′ deep that covers more than 6 square miles. For comparison, China’s Three Gorges Dam is 607′ high and 7,575′ long. And, like most of Alaska, this area is known to be seismically active, so these impoundments – which need to hold back the contaminated mine tailings for eternity – will likely experience major earthquakes.

See all the SkyTruth maps and images here.

Hands Across the Sand
Scroll to top
SkyTruth and/or its third party tools use cookies to monitor traffic in the aggregate on our websites and applications and to improve user experience. If you continue browsing, we'll assume you agree to the use of cookies. You can change your cookie settings at any time in your browser settings. Find out more in our privacy policy.