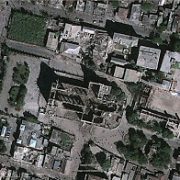 Geoeye has also published high-resolution post-quake imagery of Port-au-Prince. The images were taken on the morning of January 13, 2010. In Google Earth, you can toggle between those images and pre-quake hi-res images that were shot in March 2008, allowing direct comparison and rapid visual assessment of the damage.

SkyTruth looked at the area around the cathedral, and did this quick visual analysis and mapping of damaged and destroyed buildings in the vicinity: 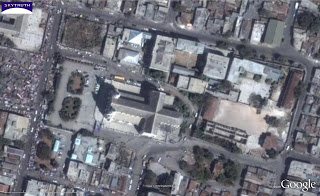 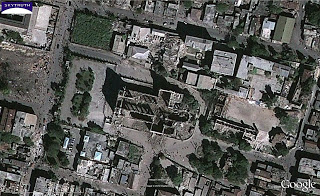 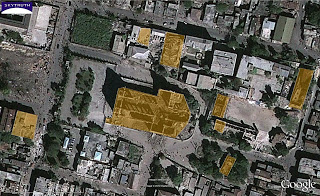 There’s also a large oil slick on the west side of the city near an area of oil storage tanks (we found out about this while watching The Weather Channel late last night). Some of the tanks appear to be damaged, and have spilled oil into the containment areas that surround them. It’s possible some of this oil overtopped or breached the containment berms and flowed into the sea. It’s also possible that one or more oil pipelines along the shore was broken during the quake. From the configuration of the slicks, it appears the leaks were sudden, substantial, and short-lived: 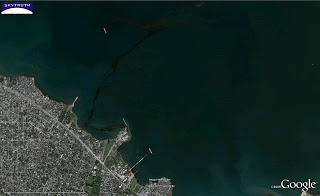 Oil slick on west side of Port-au-Prince, January 13, 2010. Click image for big version.

Google has also established a public collaborative Haiti mapping project, asking folks who know Port-au-Prince and the surrounding area to help populate the map with important and helpful features. I assume these would be the identification of specific buildings (especially public buildings like schools, hospitals and clinics, theaters or other gathering spots) and anything else you think might be helpful to responders. Go here if you want to share your knowledge of the area to help this massive relief effort.