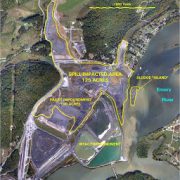 Exactly one year ago, at 1am in the morning on December 22, an embankment gave way at the Kingston Fossil Plant, a coal-fired power plant operated by the Tennessee Valley Authority (TVA) near Harriman, Tennessee. Over one billion gallons of sludge spilled out of the impoundment, flowing into adjacent ponds, the Emory River, and residential areas. This sludge – officially branded “coal combustion waste” – is a toxic slurry of the ash and dust that remain after coal is burned in a power plant, mixed with water to make it manageable, and dumped into large holding ponds for indefinite storage. 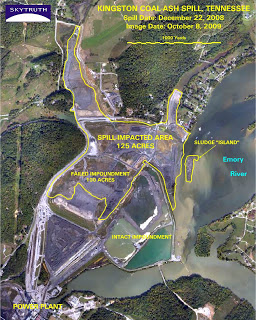 SkyTruth obtained aerial survey photography from the TVA showing the area as it looked before the spill; one week after the spill; three months later; and as it looks now. We analyzed the images to measure areas that appear to be directly impacted by the deposition of the sludge. Our analysis shows that up to 186 acres of surrounding land and water were directly impacted, and that 102 acres of formerly open ponds and waterways now appear to be permanently buried by sludge. There’s even a 4-acre island of sludge persisting in the Emory River.

With these air photos we’re not able to detect the areas throughout the Emory and Clinch Rivers that have likely been impacted as well. Erosion of these ash deposits, and transport through the river system, may continue for some time. The sludge “island” in the Emory River looks particularly vulnerable to being steadily washed downstream.

Meanwhile, the Environmental Protection Agency is still trying to figure out what to do about the management of coal combustion waste, a growing problem across America.