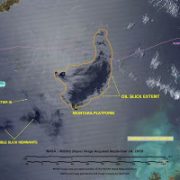 New images from NASA’s Terra and Aqua satellites keep coming in for the ongoing oil spill in the Timor Sea. At 8:45 am local time, the Terra satellite passed overhead and captured this image, showing oil slicks and sheen throughout a 9,870 square mile area (=7,455 square nautical miles). Part of the slick appears to be in contact with Cartier Island, a national marine reserve. 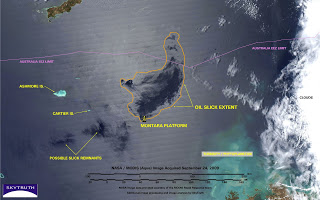 Five hours later the Aqua satellite took this image. The wind speed had increased from 10 knots to 18 knots, creating a much rougher sea surface and breaking up or obscuring the thinner slicks and sheen. Only thicker portions of the slick are apparent in this image, adjacent to the Montara oil platform, covering about 3,940 square miles (=2,976 nautical square miles). No slicks are apparent near Cartier – a good sign on Day 34 of this continuing spill.

A team of marine researchers lead by World Wildlife Fund has set out to study the effects of this spill on ecosystems and wildlife. They should be in the area for the next couple of days. If we’re lucky, we’ll get satellite images that correspond with their “sea-truth” observations and photos.

See all our satellite and aerial images of the spill here.

Offshore Drilling: Spillustrations
Scroll to top
SkyTruth and/or its third party tools use cookies to monitor traffic in the aggregate on our websites and applications and to improve user experience. If you continue browsing, we'll assume you agree to the use of cookies. You can change your cookie settings at any time in your browser settings. Find out more in our privacy policy.