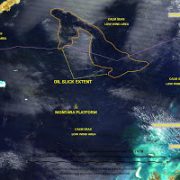 It’s been 20 days now since a well blew out on the Montara oil platform in the Timor Sea; the platform was immediately evacuated and the uncontrolled well has been continuously spewing oil into the ocean ever since. MODIS images taken about three hours apart on September 10 show an area of patchy slicks and sheen about 3,600 square miles (=2,700 nautical square miles) in size, north of the Montara platform and extending well beyond Australia’s territorial waters: 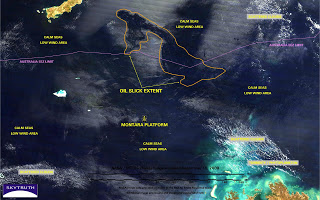 Check out all the satellite images and aerial photos in our gallery.

For you armchair image analysts, here’s a little MODIS Interpretation 101: MODIS is a relatively low-resolution imaging sensor (250 meter detail) carried onboard two NASA satellites called Terra and Aqua. It reveals oil slicks most effectively when those slicks fall within the area of sunglint – where sunlight is almost directly reflected off the ocean’s surface to the satellite, making clean ocean water appear medium-gray wherever the wind is blowing. The wind kicks up ripples on the ocean’s surface; those ripples look “glittery” and the combined effect is to make the ocean surface fairly bright. Any area of smooth, calm water will appear dark. Oil slicks tend to dampen those little ripples and make the surface smooth. Of course, if the wind is very calm and no ripples are generated, the entire area will look dark whether there’s an oil slick present or not.

When Terra orbited overhead on the 10th, the Montara platform was in the middle of a large calm area. Three hours later when Aqua took a look, the Montara platform was just outside the region of sunglint. That means we’re not able to detect any slicks in the immediate vicinity of the platform itself on the 10th, even though the well is continuing to leak and there are almost certainly slicks around the platform. Hopefully we’ll get better imagery in coming days.

Timor Sea Drilling Spill – Another Exxon Valdez?
Scroll to top
SkyTruth and/or its third party tools use cookies to monitor traffic in the aggregate on our websites and applications and to improve user experience. If you continue browsing, we'll assume you agree to the use of cookies. You can change your cookie settings at any time in your browser settings. Find out more in our privacy policy.