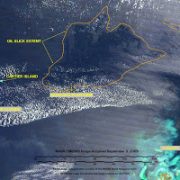 SkyTruth just downloaded and processed a MODIS satellite image from NASA that was taken on September 3, 2009. It shows the area in the Timor Sea affected by oil slicks and sheen from the Montara / West Atlas blowout and oil spill that began on August 21 is now over 5,800 square miles in size. That’s more than double what it was just four days earlier, on August 30. And it’s as big as Connecticut and Rhode Island put together: 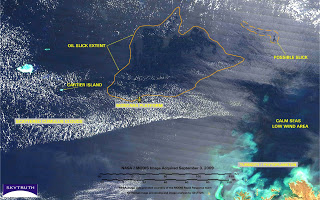 Heads up, Jakarta: the northern parts of this slick complex now appear to extend into Indonesia’s Exclusive Economic Zone.

Here is the September 3 image with our analysis. And here is the image alone, with no annotation.

Keep checking in for more information and updates to our online gallery.

UPDATE 9/10/09: The West Triton drill rig is expected to arrive on the scene today, and will be set up to begin drilling a relief well, a procedure expected to take four weeks. An Australian official reported yesterday that there had “been a reduction in the number and size of slick patches being observed.”

Timor Sea Drilling Spill – What If?

Timor Sea Drilling Spill – On The Move
Scroll to top