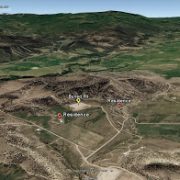 A couple of YouTube videos have been making the rounds and causing some alarm among the ever-increasing number of homeowners who have active natural gas drilling in their area, and rely on groundwater for their drinking water supply. This video shows common, normal operations at a modern natural-gas drilling site in western Colorado, operated by the Canadian company EnCana, a major player in the Rockies. One video shows drilling fluids being stored onsite in a plastic-lined open pit (a “fluid reserve pit”) while the well is hydrofractured, or “fracced.” The other video shows this same pit being closed: as a crew removes residual fluids and pulls out the liner, a bulldozer buries the pit. 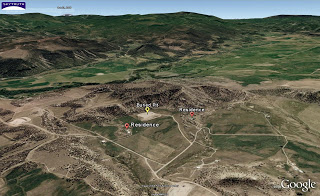 We’ve created a small gallery showing the drill site depicted in these videos, and adjacent residences. Although the operations depicted are probably allowed by Colorado law, nearby homeowners who have water wells for drinking and bathing are concerned about these practices as drilling permeates the area. Multiply this scene tens of thousands of times, and you get the idea what’s been happening in recent years with drilling in many parts of the country.

UPDATE 9/16/09: In response to a comment, we thought folks might appreciate these links to other resources about fracking: