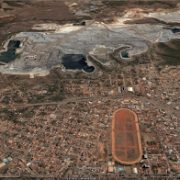 How’d you like to have a fast-growing open-pit gold mine in your neighborhood? 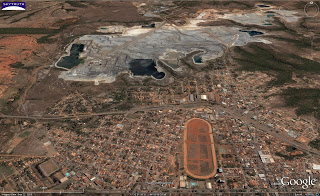 Town of Paracatu with mining operation (gray) in the background.

That’s a serious question facing the folks in Paracatu, in the Minas Gerais state of eastern Brazil. Gold mining there has occurred since the early 1700’s, but really kicked into high gear with full-scale open-pit mining beginning in the 1980s, becoming the biggest gold mine in Brazil. Since 2006, a Canadian company, Kinross Gold Corporation, has owned and operated the mine and recently began a major expansion. SkyTruth has created a gallery of vertical and panoramic views showing the mine, processing facilities, tailings impoundment, and proximity to Paracatu, a city of about 100,000 people.

This certainly isn’t the only place where mining and neighborhoods collide. Check out our gallery for Cerro de Pasco in Peru. 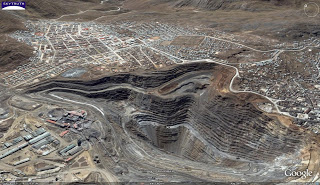 And here in the US, the Berkeley Pit copper/gold mine in Butte, Montana, gradually ate up neighborhoods throughout the life of the mine. Now the closed mine poses a toxic threat to groundwater that has landed in the lap of local residents and US taxpayers. It’s the gift that keeps on giving. We’ve posted a couple of pics of this gem. 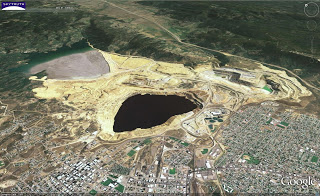 SkyTruth – How Do We Help?
Scroll to top
SkyTruth and/or its third party tools use cookies to monitor traffic in the aggregate on our websites and applications and to improve user experience. If you continue browsing, we'll assume you agree to the use of cookies. You can change your cookie settings at any time in your browser settings. Find out more in our privacy policy.