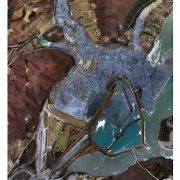 Coal combustion waste (CCW) is the fly-ash and other residue left over from burning coal. It typically contains toxic components, such as heavy metals, that are known carcinogens. CCW is disposed of in landfills, dumped (legally!) in leaky old mines and quarries, and often stored onsite in large impoundments near the coal-fired power plants.

In yet another stunning reality check on the Myth of Clean Coal, one such impoundment failed last December at the power plant in Kingston, Tennessee, spilling over 1.1 billion gallons of toxic fly-ash sludge into neighboring residences and the Clinch and Emory Rivers: 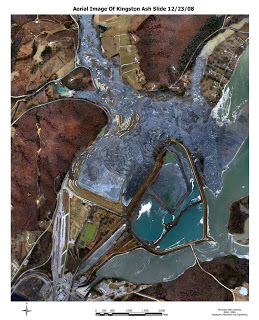 Aerial photograph of the Kingston spill taken one day after the event.

Earthjustice called us, wondering if CCW waste impoundments could be vulnerable to flooding. Power plants need a huge supply of fresh water for cooling, so they’re typically located right on the banks of large rivers. We took a look at 11 coal-fired power plants operated by the Tennessee Valley Authority (TVA) – including the notorious Kingston facility – to assess the risk that CCW impoundments could be breached by flooding. Using Google Earth, SkyTruth identified areas where the impoundments lie within high-risk flood zones by:

The FEMA flood data only covered 6 of the 11 sites. FEMA notes that their digital Stay-Dry dataset is incomplete; FEMA also produces paper flood maps, but we were unable to find any online digital flood data covering these sites. And Google Earth had old, low-resolution imagery for 4 of the sites, including Kingston, making it difficult to delineate the impoundments in those areas with high confidence (you can’t use Google for everything…yet).

Nevertheless, out of the 4 sites for which we had both full flood data and high-resolution imagery, we found 2 clear instances (Gallatin and Widows Creek) where impoundments are located within areas mapped by FEMA as high-risk for flooding. We also identified another facility (Johnsonville) where the FEMA data are missing, but it’s reasonable to infer that the impoundments are in an area of high risk.

Given the serious flooding we’ve seen lately on the Red River and some of our other midwestern rivers, not to mention the Great Flood of 1993, it seems like we’re tempting fate by storing large quantities of toxic waste in officially designated “high-risk” flood zones.

UPDATE 4/3/09: Amy Mall at NRDC just let me know about yet another aspect of the CCW mess — “In Arkansas, some of this coal waste is dumped in pits used by the natural gas industry to store drilling waste, and buried. Some of these pits are on people’s property, close to their homes, and the toxic ash blows in the air…” Read her blog post to learn more.

UPDATE 4/13/09: The Tennessean newspaper just published an article on this subject, referencing SkyTruth’s maps and images. Their website also includes links to other images and resources. Check it out here.