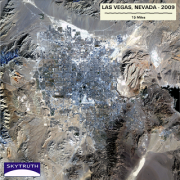 Not everything that happens in Vegas, stays in Vegas: the city has seriously bulked up in recent decades, something that is very obvious from space. In honor of the Landsat-5 satellite’s jaw-dropping 25th year of operation, NASA has released images taken from 1984 to 2009. The population of Clark County, home of Las Vegas, quadrupled during that time from 463,000 in 1980 to just over 2 million this year. 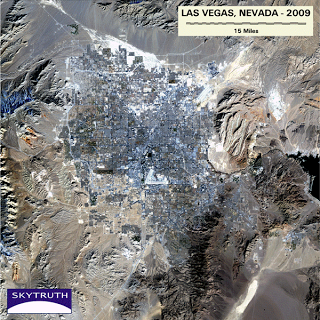 We used the NASA imagery to generate a time-series of images showing this growth. Another notable feature in the images is the sharp drop in water level in Lake Mead, one of the most important reservoirs on the Colorado River. The rapid population growth in the Colorado basin is colliding with an ongoing drought, and increasing use of water for oil and gas drilling. The development of oil shale — an ongoing controvery — would divert large amounts of water out of the Colorado River system (see a report on projected energy development (including oil shale) and water demands issued by the Colorado River Water Conservation District, and a factsheet on oil shale development and water use from the U.S. Department of Energy).

UPDATE 3/17/09: Western Resource Advocates issued a report today called “Water on the Rocks,” taking a look at the water rights in Colorado that are currently held by companies interested in oil-shale production, and the potential water use that oil-shale production would entail.

UPDATE 6/16/09: Our friends at EcoFlight have uploaded a gallery of photos of Lake Powell, from an overflight on April 30, showing the striking white “bathtub ring” that indicates how far water levels in the reservoir have dropped in recent years. Here’s a good one: 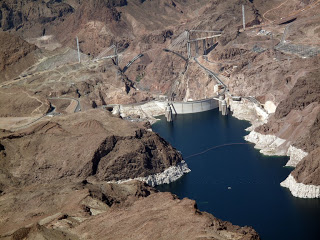