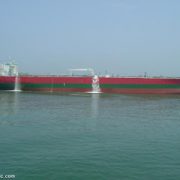 A 900-foot oil tanker carrying 41 million gallons of crude oil from the North Sea is in trouble in the northern Gulf of Mexico, about 65 miles from its final destination of Galveston, Texas. The SKS Satilla is listing because three of its ballast tanks were punctured. Nobody is sure yet what caused this sudden and mysterious damage, but coincidentally the submerged wreck of a drilling platform that had been missing since Hurricane Ike last year was just discovered near the crippled tanker. Current speculation is the tanker collided with the submerged ruins. Crews are working to transfer the crude from the tanker to other vessels. 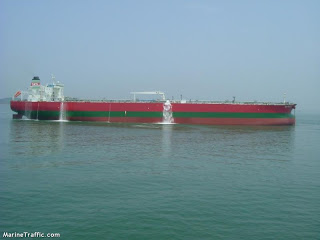 This is yet another reminder that offshore oil and gas drilling, even with all of today’s advanced technology, remains a risky business. The mobile offshore drilling unit that went missing is one of several drilling rigs that were lost or set adrift nearly six months ago by the relatively moderate Hurricane Ike, a Category 3 storm. This particular rig was the ENSCO 74, a relatively new (built in 1999) jack-up owned by Ensco International. It’s very fortunate that the cargo hold of the tanker was not breached — the Satilla, less than three years old, has a double hull. Has that saved the Gulf Coast from a massive oil spill?

This time the Gulf got lucky. But not all tankers in US waters have double hulls yet, and sometimes even that is not enough. Remember that in November 2005 a barge carrying heavy fuel oil hit the submerged wreck of an offshore oil platform that had been destroyed several weeks earlier by Hurricane Rita, a monster Category 5 storm. The Coast Guard reports that nearly 3 million gallons of heavy oil were spilled into the Gulf in that incident. See the final paragraph of the USCG Katrina-Rita damage summary. 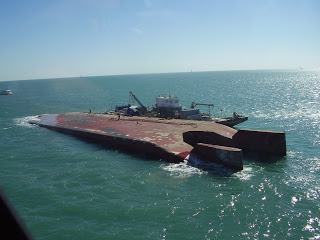 These incidents are stark reminders of the risk that still accompanies offshore oil and gas development, particularly from the associated facilities and other infrastructure — both onshore and offshore — that are necessary to support drilling and production.

Athabasca Tar Sands – No Day At The Beach

Urban Growth: Las Vegas 1984-2009
Scroll to top
SkyTruth and/or its third party tools use cookies to monitor traffic in the aggregate on our websites and applications and to improve user experience. If you continue browsing, we'll assume you agree to the use of cookies. You can change your cookie settings at any time in your browser settings. Find out more in our privacy policy.