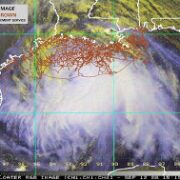 Hurricane Ike, still a Category 2 storm but expected to strengthen to Category 3 by landfall, is now moving into the offshore oil and gas platforms and pipelines off the Texas and Louisiana coasts. And the latest forecasts now place it on a beeline for Galveston and Houston, with a possible storm surge of up to 20 feet. This poses a very serious threat to coastal and onshore facilities — refineries, storage tanks, and onshore pipelines — in this very low-lying region. The next 24 hours are going to be rough going. Check out The Oil Drum for updated maps and discussion of potential damage for offshore and coastal facilities in Ike’s path. 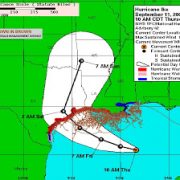 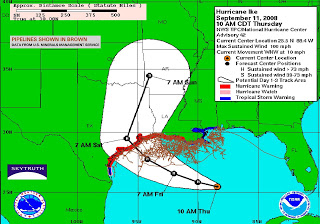 The latest National Weather Service forecast is predicting Hurricane Ike will take a sharper turn to the north, putting Galveston and Houston (and more of the offshore and coastal oil and gas facilities) in the line of fire. Here is the latest 3-day track prediction. As of this morning Ike is a very large Category 2 storm with sustained maximum winds near 100 mph, hurricane-force winds extending for 115 miles, and tropical-storm-force winds extending up to 275 miles from Ike’s center. Expected to strengthen to at least Category 3 before landfall. For a detailed, interactive tracking map, check out Weather Underground. 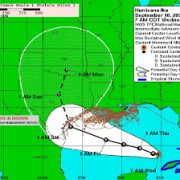 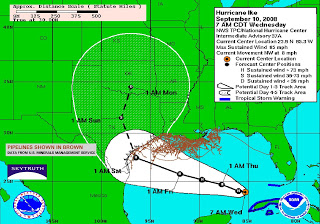 After pounding Cuba, Hurricane Ike has entered the Gulf of Mexico as a Category 1 storm, and is expected to strengthen over the next couple of days into a major hurricane. The latest forecast track shows Ike aiming for the western Gulf and the Texas coast, taking a swipe at the offshore oil and gas infrastructure on the way, and making landfall early Saturday morning. 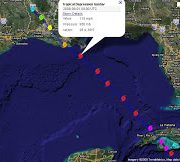 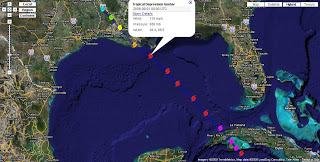 Too soon to say for sure — we haven’t yet seen any of the satellite images of the Gulf that were taken in the wake of Hurricane Gustav last week — but we haven’t heard of any offshore or onshore oil spills like those following Hurricane Katrina in 2005. One drill-rig operator, Transocean, reported some damage to three of their offshore drill rigs; one suffered damage to it’s mooring system, not good news considering that mooring systems were supposedly beefed up after Katrina blew a bunch of rigs around the Gulf. Let’s compare the two storms: Gustav was a Category 3 storm out in the northern Gulf, while Katrina was a monster Cat 5. Gustav hit the offshore oil fields with maximum sustained winds of 115 mph. Katrina moved through the OCS with maximum sustained winds of 175 mph, gusting to 215 mph, with hurricane-force winds reaching 105 miles from the eye. Katrina generated 100-foot waves in the Gulf, high enough to batter the upper decks of major production platforms. At landfall, Gustav was a strong Cat 2 (110 mph) and Katrina was a strong Cat 3 (125 mph sustained, with gusts over 140 mph). Damage increases exponentially with increase in category – a Cat 4 could be 250 times as damaging as a at 1. Katrina was the 6th strongest Atlantic hurricane in recorded history.

Since the OCS platforms are designed to withstand at least a Cat 3 storm, they better not get beat up by the likes of Gustav. A Cat 4 or 5 storm is a whole ‘nother ballgame. Let’s hope Hurricane Ike doesn’t give us that test.