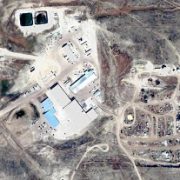 With energy prices rising steadily, nuclear power is reviving. The number of reactors worldwide is now 315, jumping by 93 (42%) in 2007. So it’s no surprise that uranium mining is booming. Thousands of new uranium mining claims have been staked across the US in the past few years, existing uranium mines are ramping up production, defunct mines are being re-opened, and new mine proposals crop up like mushrooms (hmmm….), especially in the Western US, even along the rim of the Grand Canyon. 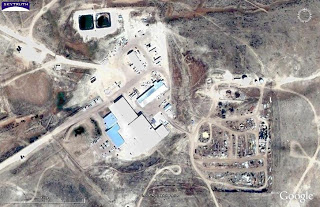 It’s good to remember that it’s not just nuclear waste that’s a serious problem; the mining, processing and transport of uranium can get ugly too. Case in point: an in-situ uranium mine near Douglas Wyoming — touted by industry and government officials as a model for modern uranium-mining techniques — is now being investigated for “an alarming volume of environmental violations.” Take a look at our Google Earth-generated pics of the site (showing what appears to be an open dumpsite next to the main facility, with open ponds and trenches containing water or other liquids). Earth users, download our KMZ to take your own self-guided tour. Try your hand at image analysis, and let us know what you think is going on at this site.

Why support SkyTruth? A Funder’s Perspective