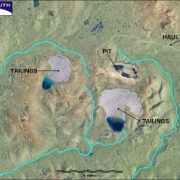 What could become one of the world’s biggest open-pit gold mines, called the Pebble Mine, is being proposed in southwest Alaska. Opponents of the plan, including sportsmen, commercial fisherman, many native Alaskans, and former Alaska governor Jim Hammond, are concerned that the mine could affect the economically important wild-salmon fishing and tourism industries. The mine site is located in the headwaters of streams flowing into Lake Iliamana and Bristol Bay.

SkyTruth has generated a gallery of satellite images showing what the mine site looks like now, and a series of simulations based on several versions of the mine development plan that have been published by the mining company, Northern Dynasty. A tip o’ the hat to one of SkyTruth’s talented volunteers, Andrew Vernon, who produced this simulation showing the most recent plan. 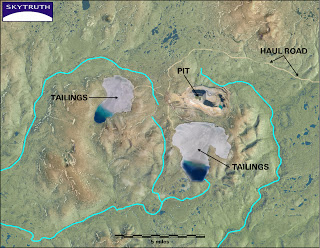 And another nod to Erin and Hig McKittrick for their excellent Pebble Mine website, including a blog, photo gallery, and interactive Google map of the Pebble Mine site and surrounding area. All in all, this is an outstanding example of the “ground truth” comment Paul discussed a few days ago. Expect to see a whole lot more of this in 2008!