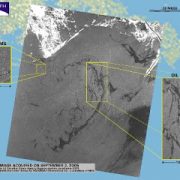 Speaking of oil spills, SkyTruth images revealed significant spills covering a large area of the northern Gulf of Mexico in the wake of Hurricane Katrina back in 2005. At the time, nobody was talking about what had happened to the 4,000 offshore oil platforms – and 34,000 miles of pipeline on the seafloor – when Katrina ripped through the Gulf as a Cat 5 storm, followed a few weeks later by Hurricane Rita. Attention was rightly focused on the unfolding human tragedy, as well as the 7-9 million gallons of oil spilled from damaged pipelines, refineries and storage tanks onshore. 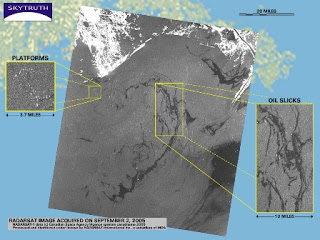 But for months after the storms, officials from government and industry repeatedly claimed that there were no “significant” spills in the Gulf. That line is still heard even now. Yet in May 2006, the U.S. Minerals Management Service published their offshore damage assessment: 113 platforms totally destroyed, and – more importantly – 457 pipelines damaged, 101 of those major lines with 10″ or larger diameter. At least 741,000 gallons were spilled from 124 reported sources (the Coast Guard calls anything over 100,000 gallons a “major” spill).

Wells and platforms were shut down before the storm, so leakage from those facilities was minimal. Pipelines were shut down too. But what the officials failed to mention is they don’t require industry to “purge” pipelines before a severe storm – so they were probably still loaded with oil, gas or liquid gas condensate. Any section of pipeline that was breached leaked all of that product into the Gulf within hours of the storm. That’s what we think accounts for the widespread slicks seen on the imagery from September 1 and 2, covering hundreds of square miles and obviously emanating from many points of origin. These slicks dispersed after several days of high winds offshore, as shown by our followup imagery taken on September 12, but a few problems remained as evidenced by ongoing leaks from wrecked platforms.

This report from MMS details the pipeline damage that occurred.